Carey Services’ Creative Hearts Art Studio was created in 2016 to provide a place for the individuals we serve to have a way to express themselves through various artistic mediums, including painting, sewing, sculpture, and music and movement.

The studio artists sell their works and receive the revenue. In 2018, the artists created a sculpture that is displayed in a Marion city park, and many of their paintings are displayed in local offices and homes. The Expressions event is a large public art show each October that helps introduce people to the studio and the talented artists who create their works there.

The program launched in October 2016 with a two-week residency from artists with the Creative Abundance Group. The original studio opened in a section of our production facility building on the Marion campus, but participation was such that in February 2017, the programming was expanded into two rooms of the Marion day services area. The original studio was renamed the Inspirations Room, while the new rooms were named the Imaginations Room (which focuses on creative expression through music and movement activities) and the Limitless room, which contains additional painting and sewing space).

The original program artwork upon which the logo was based. The artwork was created a staff member who helped launch the program. 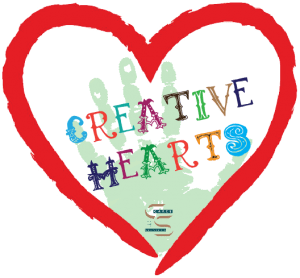 In 2016 we established the revised logo and released it publicly.

“Seeing everybody back in the making space doing new things and watching them grow as they explore and create has been powerful for everyone involved,” said Dan Kaufman, the agency’s director of day services. “Folks are choosing what they want, and we’re seeing more engagement and independence. We’re having people who are familiar with our work but haven’t been here for a while comment when they see the new programming that it’s taken the good work we were already doing and pushed it to another level.”

The program’s name was selected after staff members and individuals we serve made nominations; the area names also were selected from that nomination list.

“We see creativity all around us,” Kaufman said. “We’re seeing people we serve create things when some people have said they would never be able to do anything. We’re seeing our staff really catch the vision for this type or programming and suggest new things we can try. We’re just getting started, and we’re convinced the best is yet to come.”